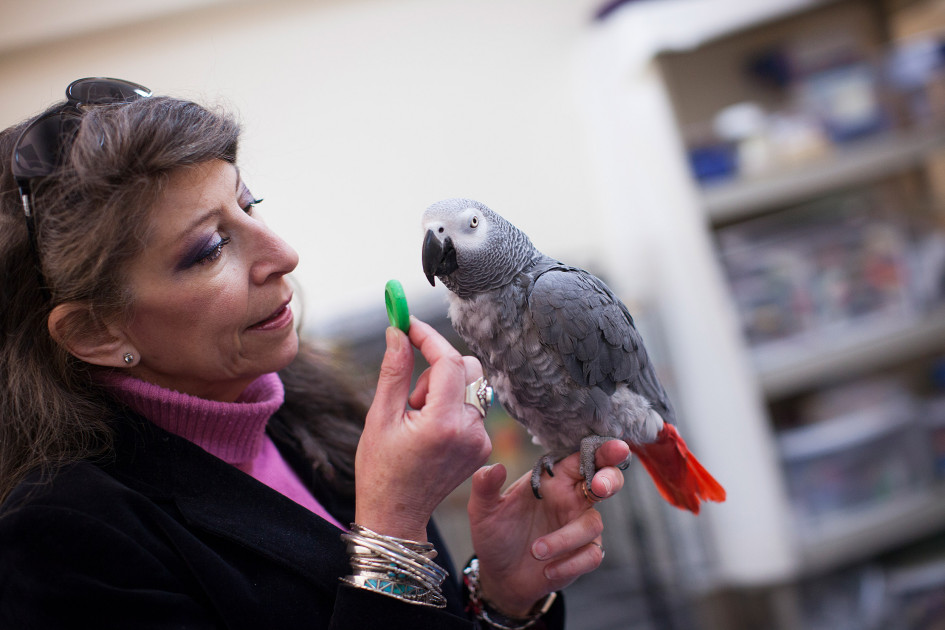 A new study shows that African grey parrots can perform some cognitive tasks at levels beyond those of 5-year-old humans. The results not only suggest that humans aren’t the only species capable of making complex inferences, but also point to flaws in a widely used test of animal intelligence.

Usually, calling someone a bird-brain is meant as an insult, but an African grey parrot named Griffin is rewriting the rules when it comes to avian intelligence.

A new study shows the African grey can perform some cognitive tasks at levels beyond that of 5-year-old humans. The results not only suggest that humans aren’t the only species capable of making complex inferences, but also point to flaws in a widely used test of animal intelligence. The study is described in a November paper published online in Behaviour.

The paper arose from a collaboration among cognitive psychologists Irene Pepperberg, a research associate in Harvard’s Psychology Department; Francesca Cornero ’19; Suzanne Gray A.L.B. ’15, now the manager of the Alex Foundation at the Pepperberg Lab; and developmental psychologists Susan Carey, the Henry A. Morss Jr. and Elisabeth W. Morss Professor of Psychology, and Shilpa Mody, Ph.D. ’16.

The classic study uses a two-cup test. A reward is hidden in one of two cups; subjects are then shown that one cup is empty, and those that successfully choose the other cup are thought to employ a process known as “inference by exclusion” — reasoning that the reward is in cup A or B; if it is not in A, it must be in B.

For years, researchers have argued that young children, including infants as young as 17 months, and animals from a wide number of species, including grey parrots, understand this process.

But what’s important about this study is not just that Griffin is, in some ways, as smart as a 5-year-old, but, said Pepperberg, “We also argue that this two-cup task, which has been the gold standard, only tells you about a certain level of ability. If you really want to study inference by exclusion, you have to go to the more complicated three- and four-cup tasks.”

Ultimately, Pepperberg said, tests like these don’t only reveal the intelligence of birds like Griffin, but also help shed light on the roots of human intelligence.

“Birds are separated from us by 300 million years of evolution, and their brains are organized differently than ours,” Pepperberg said. “That’s why this was so exciting — because we were able to show that Griffin was working at the level of a 5-year-old, on a task at which even apes would not likely succeed.”