How To Handle A Macaw’s Blood Feather

Should I pull out my Macaw’s blood feather?

🦜This morning I noticed some blood in my parrot’s wing. It’s a blood feather! I was looking forward to her new flight feathers developing because when I got Kailani, my Catalina Macaw, her feathers had already been trimmed. Bummer! One of the new feathers broke!

My gymnast with feathers likes to monkey around her perch and hang from her toy. I figure it’s great exercise, but she feel! 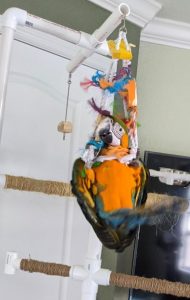 Always Have Flour On Hand & Tweezers

Fortunately her feather didn’t bleed profusely. Her perch is new and this was her second fall, probably on the same feather. She loves her perch, but I think she’s getting used to it. Plus, she has a toe that points the wrong way and probably makes her unstable. 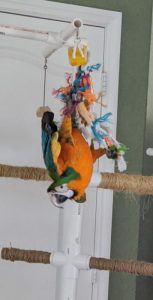 We looked at her wing and immediately got flour to stop the bleeding, which worked wonderfully. All seems well. I’ve kept my eye on her wing and it

has continued to clot, not bleed. Online I read that blood feathers should be pulled out because they are like a ‘faucet’ that can continue to bleed later. I’ve asked and am waiting to hear back from my mentor as to whether I should pull it, which is said to be painful for parrots, or let it be, since no one would be around to pull it out in a natural setting.

I suspect that Kailani’s feather didn’t bleed much because it had already clotted part of itself. Had it been bleeding more or had it not stopped, I would have pulled the feather out and made sure the skin/wing stopped bleeding. 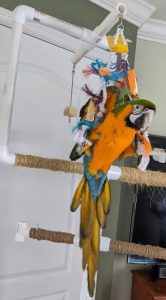 All’s Well That No Longer Bleeds

Whew! Dogs and cats don’t have issues like this, do they?

So far, so good. You can see from my afternoon-monkey pictures, Kailani is doing fine, is having fun and her feather has clotted. She is still being her ‘normal’ self, wanting to come and cuddle with me, happily taking a piece of an unripe banana (yuck! I didn’t like it, but she gobbled it up), so all is well.

In case you didn’t know, with parrots we look to see that their behavior hasn’t changed. That, and a change from their ‘normal’ 💩 are the first indicators that something is off. I’ll also watch tonight, check her wing again and see that she doesn’t fluff up and ‘hide’ at the bottom of her cage, which are also indicators that she’s not up to par.

Ahhh, the adventures of having parrots!