We know people in the parrot world, and one gave us a 🦜 Green Cheek Conure (GCC) because he couldn’t sell her. He explained that she probably had been learning to fly and hit a wall, causing some neurological damage. The affect is that she has a hard time controlling her feet, so she often falls in her cage. She can’t perch, and her modified cage has no perch, but she climbs the walls. She likes to go up as high as she can, as do all parrots, so we gave her a wired-platform she could rest on. She also started having seizures – which were hard to watch. I didn’t know if she was dying… she would turn her head — or maybe it was involuntary — and cause her body to flip over. She was unstable, to say the least. She also began fluttering her wings uncontrollably, even though she seems to know that she can’t fly. Bottom line, she has seizures and can’t control her body well.

One of the most important things any parrot owner needs to know is that they are highly social animals; in nature, depending on the species, they all live in flocks of 4 or 5 up to hundreds (maybe more). Even though they pick their bonded mate, they still rely on and are a part of a flock. It gives them their security and a place to belong. Umbrella cockatoos, for example, are so compassionate and flock-oriented, that they will not abandon a dying member, but rather stay with it until it is gone. 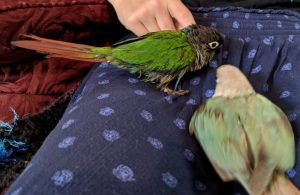 If you spend time with your parrot, you can easily give them a buddy, because they are accustomed to spending 24/7 with flock mates, or at least their bonded mate. So, what to do with Tink? Because conures don’t seem to share the compassion. We tried having her spend time with a new baby GCC, Markle, which was great– at first. Putting new parrots together always requires a watchful eye until you are certain that they will get along. People often put them in cages side by side first, so that they can safely get to know each other.

You can see that we only put these two together in our presence. 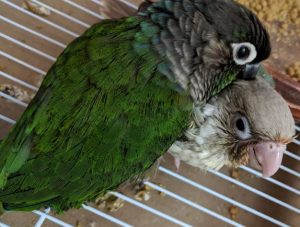 At first it was so sweet: Tink was preening Markley, which means that she was helping remove the shafts from her new feathers. It’s a grooming, loving thing that they do for one another.

Unfortunately, the next time we put them together, Markle started biting at Tink. Now this is tricky, you want to watch that no harm is done but you also want to allow any natural ‘pecking order’ that is being established. It’s a bird-peck-bird world with these guys!

Another attempt to put them together a couple of days gave us similar results. In any case, Markle’s mate has been picked out, because of her coloring. So, she’s not Tink’s ultimate bond, and we just didn’t see bonding happening anyway.

How Do You Handle A Problem Parrot?

Parrots are amazing. My mom went to a new doctor, said she was snow-birding down here in Florida to be close to us– and she mentioned we have parrots. The doctor gave her a funny look, saying, ‘But, they aren’t good pets. They don’t cuddle.”

“You’d be surprised!” my mom answered, raising her eyebrows. “They do. Maybe more than cats!”

Parrots are highly intelligent, which you probably know. That can be amazing, allow you to develop an amazing bond with them– and it also seems to mean that they can have complex issues as well. Like Tink.

I’ve heard of parrots that scream or bite a lot; or parrots that pluck their feathers. You don’t hear much about other pets being nervous, depressed or anxious- but, unfortunately, it’s not uncommon with parrots. They require specialized 🥝 diets, specific minimum size cages, wooden perches that vary in size (the list goes on), — and — a lot of time and attention.

Anxiety and feather-plucking are bad enough, but what to do in a situation like Tink’s? In nature, she’d probably wound’t have survived one day. How do I help her, keep her happy and healthy — and from flipping violently?

Then my husband found CBD Oil

We started to research and have been finding that CBD oil has many benefits and could help Tink. CBD, cannabidiol is derived from the cannabis plant but lacks THC, the psychoactive component. Among other benefits, CBD seems to have neuroprotective properties, meaning that it helps the signaling systems in the brain, which help reduce seizures.

Sure enough, since Tink is young, we guess that she’s less than six months old, she seems to be doing well with the oil so far. Her seizures have greatly minimized and she seems “More aware and more conure-like. She sounds more like a conure,” my conure-crazed daughter said. I agree, Tink seems to be able to hold herself better, she is falling a lot less in her cage and she’s no longer freaking me out by turning her head 180 degrees, followed by a body flip-seizure!

Next I plan on trying the CBD with an African Grey who I adopted and who is plucked or has been plucked and an Orange-winged Amazon that is anxious.

Like so many people, I strongly believe in more natural-based medicine. I also believe that food is our best medicine, and I like that help oil provides omega oils, which are needed to balance the ‘bad’ oils we eat. Same for parrots, seeds provide them with too many ‘bad’ oils, which can greatly affect their health.

In doing research for Tink, I was surprised to learn that seizures are common in parrots:

Seizures are reasonably common in birds and often observed in Amazon parrots, African grey parrots, budgies, canaries, finches and lovebirds. A seizure may result from any disorder in the brain that causes spontaneous electrical discharge in the nervous system. This electrical discharge causes a variety of involuntary body responses or alterations in behavior. A seizure is also referred to as a fit or convulsion.

No doubt a proper diet can help minimize health problems, but they still occur. I have also learned that head trauma is a cause for neurological problems in birds — although it seems obvious, logical.

In our family, we love parrots, so we are developed a CBD oil formulated for parrots because of Tink. We call it Tink’s CBD Oil. It feel so good to see her doing better, not swaying like she had been, and to see her get a sparkle in her eye! We want to be able to help other bird owners who’s bird may be having similar problems or having difficulties adjusting to a new home, going to the vet or plucking.

Happiness is having a happy parrot!