Healthy Parrot, Keeping a Happy Parrot, The Plight of Birds 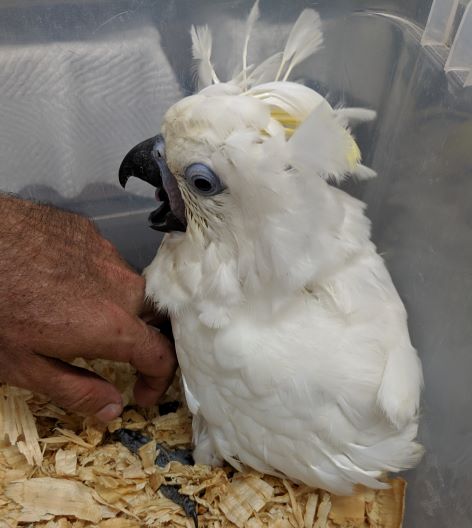 We live in very unique and interesting times that afford us quite a bit. Ours is an era in which things come in two days on Amazon, information doubles and triples all the time, and exotic parrots from around the world are readily available at your favorite bird store – everything is at your fingertips. Including experts.

A couple of weeks ago my daughter my husband and I went to visit Tony Silva. He must be the original Amazon because he is the Parrot Man. We showed up as strangers meeting in person for the first time to spend some time with him, his parrot farm and to learn more about parrots, a passion of mine. Tony was dressed in work clothes and sweating from having been working outside on his parrot cages: a dedicated, down to earth man. I say that Tony is the original Amazon because, like the online company, his customer service is cutting edge, and he doesn’t have customers! He just gives help: he has taken time to reply to me on Facebook, someone he doesn’t know- he answers questions, signed my copy of his book and hosted us at his house. Even my world-renowned vet says that it’s amazing the way he shares his wisdom. As much as I would like to be special, he helps me just like he helps anyone else.

It’s taken me a while to write this blog because digesting everything that I saw and everything that we talked about has been quite a bit to chew on. For example, I guessed that Tony would have some amazing parrots that I had never seen before; I wasn’t let down. He had amazing parrots and many of them. His Major Mitchel cockatoos were stunning, their pink and peach crowns impressed me so much so that I think I need to print a picture of them for my wall.

Now I pride myself on being pretty nutrition savvy, but Tony knows foods as they pertain to parrots as well as he knows all 402 parrot species, most of which he has bred.

“Empty carbs,” he answers without blinking. I’m a little thrown. I consider oatmeal ‘healthy’ for humans and most healthy things for humans, such as kale and broccoli, are also highly beneficial for parrots. I may have to research oatmeal and see whether or not it is benefiting me.

“Peppers? I know they are a fruit, but I’ve heard they are good for them,” I pose.

‘Only hot peppers. They have capsaicin, the sweet pepper do not. The capsaicin is anti-bacterial…’

He’s so right: “Capsaicin and gingerol analogues inhibit the growth of efflux-multidrug resistant bacteria and R-plasmids conjugal transfer.” (Source https://www.ncbi.nlm.nih.gov/pubmed/31022566) Next I’m going to have to ask him about feeding ginger, which has the gingerol, to my parrots.

Tony On Fruit For Parrots

One of the most frequent questions I receive on my https://www.facebook.com/ParrotBliss/ page is whether or not people can give their parrot fruit as a treat – I can also tell that one of the biggest quandaries is on seeds, but people don’t always ask about how to transition their parrot off of seeds or about whether they are part of a healthy diet.

I cringe when I see bags of sunflower seeds for sale at parrot stores because, unless these are sprouted, the lack of nutrition in a seed-only or seed-heavy diet is huge. It is a life-shortening sentence and a recipe for an unhealthy life, especially for larger species like Amazon parrots who are prone to fatty liver disease.

I like to learn about and research parrots and anything pertaining to them. So, fruits and seeds are not a parrot of my flock’s diet coming from me. My husband and daughter are the ones that give these as treats and training rewards. In limited amounts I’m ok with these, but I thought I’d take the opportunity to ask THE expert, the Parrot Man, Tony about giving fruits to parrots.

Before I post the video I took and tell you what he said, let me frame his expertise for you. In life, I’ve learned that I don’t know everything and can’t, so I look for experts who have done the research and I listen to what they have to say. I digest what they share and, this way, I tend to be savvy about topics that are important to me such as parrots and diet (for humans and parrots).

Tony has developed himself as an expert, arguably the world’s parrot expert, over the last 40 plus years. He shared a video on Facebook/Instagram in which he’s promoting his new book, Macaws (available here http://www.psittaculture.eu/product/macaws-macaws-in-field-and-aviary-by-tony-silva-book-english-2019/?fbclid=IwAR3RM8m31VPsjAbnEUTmCqDm0HrOKx2n-MrdnBS5M_T2-RXezESkv9hZ8KU In the video he tells a story about when he was young and would cut out of school to take grapes to a local pet store that had macaw parrots. He says that the owner explained that macaws only mate while flying in the air.

Really? Wow! Did we used to believe such make-believe myths about unknown species. Yeah, I think so.

Tony has bred all the Macaw species save one and where others can’t breed difficult species, Tony can and does. He has researched parrots in the wild all over the world and has studied them meticulously. Everywhere I go people speak highly of his character and parrot-knowledge and wisdom.

Yes, his perspective should influence parrot diets everywhere, if you want a happy, healthy parrot.

I love an argument based on observation because it is clear of bias. Tony’s study of wild parrots provides hard evidence of a parrot’s natural diet.

Simply put, he says, parrots eat green, un-ripe fruit in the wild. Apples, he said, were more bitter when we were kids because they are now grown to be sweet, or more sell-able. In the wild, parrots avoid larger animals, like monkeys, who eat ripe fruits, so parrots naturally eat green: green vegetables and green fruits.

Ripe fruits, as you know, are high in fructose, or fruit-sugar, which a parrot’s digestive system is not built for.

A parrot’s diet, Tony says, should consist of 60% pellets and 40% vegetables. This 40% should also include some vegetables high in Beta Carotene, like sweet potatoes, carrots or pumpkin. He also stressed the importance of not making their vegetables into chop, because it is prime breeding grounds for bacteria.

Not an issue for me, chop doesn’t look appealing to me, so I assume it isn’t for my parrots either. I cut kale and their vegetables with a knife and serve them up!

He’s remarkable. I wish he was an app because I always have questions popping up in my mind. Blueberries? I’ve heard they are good for parrots. Ragged feathers, does it mean anything? Darker-than-normal feathers? Little 3 inch pumpkins they sell for halloween? Because my parrots had fun playing with these, but shall I get more for them? Seeds for small species, should I rotate parakeet and canary seed-offerings? There’s a new question every day!

I often refer to my copy of Psittaculture: A Manual for the Care and Breeding of Parrots by Tony – as my bird-bible (available at https://www.psittaculture.eu/product/psittaculture-a-manual-for-the-care-and-breeding-of-parrots/)  because it has every species in it and is thick, hard to lug to Starbucks, but I do anyway. I’m a writer- and the current trend of writing short books suits my style. In this age though, how often do you find a complete book with a full breadth of information? You find it from the man who helped breed the almost extinct Spix macaw, The Parrot Man, the one who has been Director at Parque Lorro, a zoo in Spain with the greatest collection of parrots.