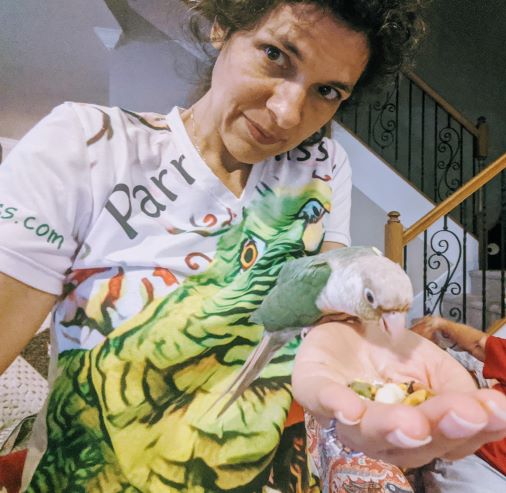 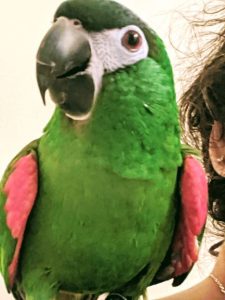 What Gender Is Your Parrot?

Monophonic parrots are parrots that physically look the same, you can’t tell the gender difference by looking at them.

Dimorphic parrots are parrots that display their gender difference in their plumage.

Finding out what gender your monophonic parrot is can be easy, though I was confused until I did it. In this video you’ll see where to take feather samples from on your parrot and you can see how we have one person hold Milo, our Indian Ringneck (note: Indian Ringnecks are dimorphic, we just had Milo close by and she volunteered to be in the video! An Indian Ringneck who is a year or two old will show their gender in the neck: males have a beautiful ring, female hens have no ring).

Of course, if a sexually dimorphic parrot is young, you may want to DNA the parrot to find out if it is the gender you are after. You may not want to wait until all his/her feathers grow or until he/she matures. Cockatiels, for example, don’t show their gender (in their tail feathers) until they are around 8 months. So, DNA-ing a dimorphic parrot may be to your advantage too.

It is important to note that you must pull the feathers from your parrot; generally samples require 4 to 6 feathers. Pulled feathers have DNA at the follicle, which is what is tested. A feather that has fallen out on its own won’t have the DNA needed. Make sure to pull. It is said that pulling a couple feathers doesn’t hurt your parrot (I don’t know if that’s true or not) and it seems less intrusive. Consider using tweezers to pull the feathers because you want to pull the shaft (the middle ‘trunk’ if that helps). Pulling the barbs doesn’t always work, sometimes it just separates the barbs from the rest of that feather. Tweezers allow you to get a strong hold on the shaft and quickly/easily pull the feather out, minimizing how long and how many times you have to pull.

Another method is to use blood — 🧛 You can also cut a nail high enough to get your parrot to bleed. I’m not a vampire, I don’t seek my parrot’s blood 😉, so…

I prefer pulling feathers because cutting a nail to get the parrot to bleed doesn’t sit right with me. An open wound in a human always opens you up to possible infection. I know it is unlikely to happen to your parrot, but as of now, I think pulling is easier on your bird. I don’t know why, but cutting a nail is common, it is the way most pet shops seems to get a sample. That leads me to believe that cutting can’t be all that bad…

Why Would You Want To Know Your Parrot’s Gender?

Mature female parrots can lay eggs, even when they have no male companion. Without a male, the eggs will be infertile. As you can imagine, laying eggs can be hard on a hen and sometimes they can run into difficulties.

Another benefit to knowing whether your parrot is male or female is that you’ll know where you cannot pet them. The back of a mature hen should be off limits and the vent area on a male should be as well. These areas are reserved for their mates and can sexually stimulate them. A sexually frustrated and hormonal parrot can be difficult to deal with. To avoid being bitten or having your parrot bliss bond broken do to a drastic change in your parrot’s personality, avoid exacerbating hormonal issues by knowing where not to touch your parrot.

There is a third way of finding out your parrot’s gender which requires a minor surgery. Avian veterinarians can perform surgical sexing, a procedure in which they make a small cut to look in at your parrot’s reproductive organs to document their gender. I understand this is done infrequently since it is a surgery, which always has some risk, and sending a blood or feather sample to be tested is a fraction of the cost.