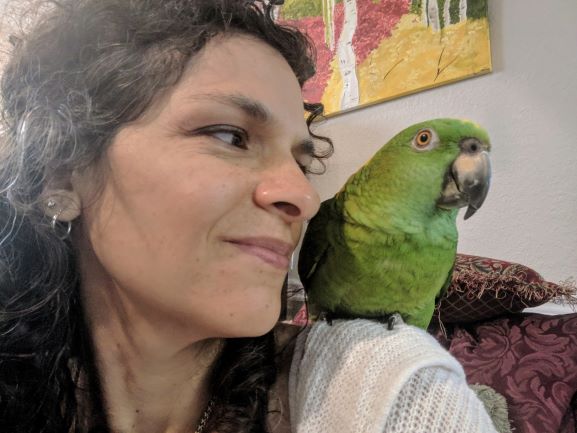 This is Lorenza, my Yellow-naped Amazon. I adopted her in the fall of 2018 – we had never had such a big parrot, so we didn’t know what to expect with her behavior. She never stretched her wings and other than grousing, she never made “Amazon” sounds. Still, her poops, by our accounts from searching online, were off – her urine was colored. In the month we had her, she seemed to be less lethargic and her plumage started looking better. We weren’t able to weigh her initially, which we like to do with new birds, because we weren’t comfortable enough to try to get her on the scale. So, we weren’t sure, but felt she looked thinner.

A month later we took her to the vet – where she was diagnosed with FLD (Fatty Liver Disease). The vet prescribed milk thistle and a calcium supplement (because FLD often causes a lack of calcium).

I suspect that Lorenza did lose weight her first moth because I gave her a seed-free diet, which was probably a drastic change for her body. I’ve learned since that parrots are supposed to be weened off a seed diet so that you give them less seeds every day and slowly transition them. I’m lucky that Lorenza got through this period- I don’t know what can happen if a parrot isn’t transitioned, but parrots can be creatures of habit and stubborn – I wonder if some just won’t eat if they aren’t given seeds.

In the video you can see that Lorenza is acting more like a normal parrot. She’s walking around, chewing on a cat scratcher and looking to see what other trouble she can create!

I am still stingy with seeds when it comes to Lorenza since I can see, by her poops, that her liver has not fully recovered. The vet gave me the impression that this is a permanent diagnosis, but I’ve heard people say that the liver can heal itself and recover from FLD. Some probably depends on how damaged the liver was before a diet correction.

Unfortunately, most exotic bird stores feed their parrots a pellet and seed mix, as do a lot of people. Parrots sift through and choose what they want to eat, ignoring the pellets and choosing only the fatty seeds. Some parrots are more prone to FLD than others, like Amazons and Quakers. A baby parrot that is fed a mix is unlikely to have liver damage, but it can be challenging to transition them to pellets and vegetables because they are already accustomed to seeds. Every expert I’ve run into personally and online has said that vegetables are a must for parrots because these offer phytonutrients, which only come from vegetables. I am not a nutritionist, but I understand that a human or parrot body absorbs phytonutrients from vegetables- which some nutritionists say is not the same as taking vitamin supplements. Simply put, vegetables are a must for health.

I still have a hard time getting Lorenza to eat greens! They say parrots are social eaters, if you eat it, they are more likely too. Yeah, sometimes, but not much. Best option is to start a parrot on a healthy diet. If not, as in my case, correct their diet and maintain a proper diet. This way FLD is a condition that can be lived worked with and your parrot can be a happy and pretty-healthy fid!