Breakfast Eggs For My Yellow-Napped Amazon 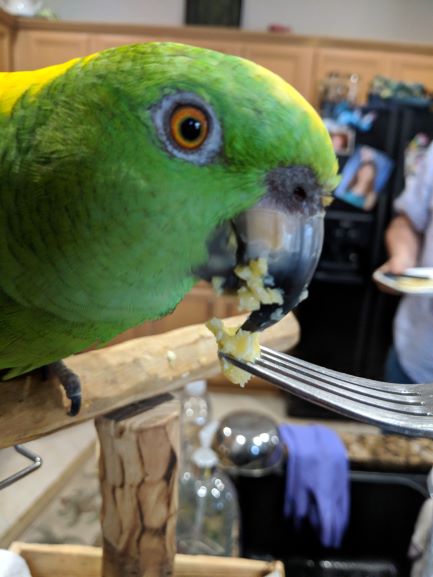 Meet Lorenza, my Yellow-napped Amazon who is on a strict diet because she has FLD (fatty liver disease). The vet said that eggs can be on her diet, and she gobbles them up! Eggs are a complete meal, minus vit C, so I figure, it’s got to be good for her. Hmmm… I don’t know if the vet meant she could have them daily, do you?

How Lorenza Joined the Flock

My daughter, Xelha (pronounced Shell-ha), is a bird expert, so one of her favorite pastimes is to visit our favorite exotic bird stores on the weekends. Last fall, we were visiting one and saw Lorenza. She spoke to me, saying “Hi” and “I love you,” from inside her cage. I figured she did this all of the time, I didn’t really think that she loved me! We walked to the next isle of birds and my daughter pointed out that Lorenza didn’t stop watching me. She turned in her cage to face my direction until I circled back around to say hello again. She was a character and certainly had my attention. However, I wasn’t planning to get a bird, let alone an Amazon. I have heard that they are loud, demanding and, of course, they are big which means you need a big cage for them. So, we went home.

But I couldn’t stop thinking about her. I had sent my husband a Marco Polo of Lorenza talking to me, which I watched several times that afternoon. That night I couldn’t sleep. All I could do is think about that Amazon… too much money. Too much responsibility. I already had the best bird in the world, a Caique named Phoenix who was with me all of the time.

The next day I felt tormented. Was Lorenza choosing me? Why couldn’t I stop thinking about her? I felt like a five year old that asks for candy over and over and over…

Did she like me? Can you turn down an exotic bird that choses you? Why me? “I’m being ridiculous,” I told myself.  I tried to focus on work and let the idea go. I guess I kept talking about her though, because around lunch my husband asked if I wanted to go get her, and we did.

Lorenza delighted us on the drive home. She leaned toward me in her carrier cage, which surprised me. My husband and I were in a daze of amazement and wonder at having just purchased the largest bird we’d ever had, when we were further surprised as she laughed along with my husband!

Adjusting to a New Home

I thought that Lorenza was a scared bird, so I cautiously took her out of her cage to hold her that night.  She seemed slow and cautious as she came to me and let me pick her up. No one else was allowed to approach her, they really still aren’t. Maybe she’s wasn’t a scared bird, just a temperamental one!

A couple of months went by and Lorenza was making herself at home. She let me pet her and liked spending time with me on her perch or on my arm. As our first big bird, we didn’t realize that she wasn’t active, which is a-typical for a bird. Xelha and I started to notice little things. Her feathers seemed to be getting brighter and she looked like she’d lost weight. We tried to analyze her poops, which you are supposed to do to monitor your bird’s health, and we thought they looked like something was wrong. Once we had enough clues that gave us an uneasy feeling, we took her to the vet.

Pizza is not for birds!

Fortunately, our vet is a world-renowned avian doctor, Dr. Susan Club. Unfortunately, the prognosis was that Lorenza has FLD, which will be an on-going issue. It can be common for Amazon parrots to get FLD when their diet is too high in fats, which they tend to get from seeds. Birds are funny in the sense that a lot of them can live as long, or longer, than a human, but they can’t tell you where they’ve been or what’s happened to them, even when they talk. Dr. Club guessed that Lorenza was around 10 years old, which is what the seller had said, but there is no real way to know a bird’s age. She may have had too many seeds in the bird store, but, more likely, her previous owner also fed her seeds or fatty human foods, like pizza.

That’s Lorenza’s story. She really did choose me, which I think is so cool. Now I can see why, I eat like a bird, so we have more in common that you’d guess. She’s a happy bird, unless Xelha or another bird are close by (Lorenza gets jealous). A better diet has meant that Lorenza now moves around, trying to bite at and rip things up, which is healthy bird behavior. She stretches her wings, another normal part of a bird’s routine, but something we had not seen her do those first months. I hadn’t know that her wings held red and black feathers until Dr. Club was giving her an exam and opened her wings!

Lorenza tells me when she wants some of what I’m eating, “Want some!” She also tells me when she wants to be picked up, “Wanna come,” and says “Bye-bye” when she knows I’m leaving the house. I enjoy meditating with her in the morning, perching her on my shoulder for a walk around the block, sharing my morning eggs with her and petting her so that she fluffs her cheek feathers out, like a chipmunk.

Yes, parrots make great pets. Of course, it’s not all fun and feathers. I used to travel the world- no more. I used to clean when the moon was blue- now my broom is blue and it’s become attached to my hand. Still, the poop, seed and cage cleaning are all worth a BFF – best feathered friend – bond.