The Story of Kami’s First Perching

At what age do you begin to put a baby parrot in a cage? 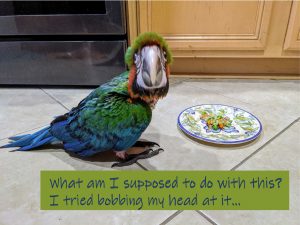 It just so happened that I decided to get a cage ready for Kamuela (Harlequin Macaw who we call Kami for short) to sleep in. So, I had dragged one of our 6 foot-tall parrot cages from the garage-  A parrot’s cage should be twice their wingspan in width and three times in length and height. Frankly, Kami’s cage won’t meet those requirements, but they don’t pre-make indoor cages larger and his cage is already eating the room up, it’s so big! However, Kami will only be in the cage to sleep in at night or when we are gone during the day, which is not often, since we work from home.

Why Is Kami’s Cage Larger Than Our Catalina Macaw’s?

because Kami is already looking bigger than Kailani, our 1 year-old Catalina Macaw. Kami’s tail isn’t as long as Kailani’s yet, but when you put the two close together to see them side-by-side, wow! Kami’s head is larger and his beak is catching up! 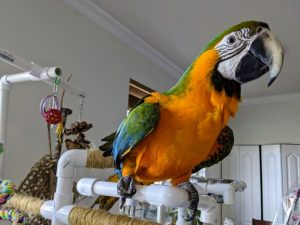 What? At 2 and 1/2 months Kami is already bigger than Kailani, a fully-grown Macaw? Yes! And, yes, I’m daunted! How big will Kami be?

So, yes, I pulled out the big cage. When a parrot is still small, you need to provide a flat surface. Their feet are not ready for the wires at the bottom of a cage nor are they ready to hold onto a wooden stick/branch to perch for extended periods, the way young and adult parrots do. Kamis been living in a white bin, but he’s outgrowing it. He has room to move and all, but his tail was starting to hit the sides when he turns. He wants to be out and wants to walk around! So Out Comes The Monster Cage! And, it turns out, just in time! As I was cleaning and preparing the cage, I turned to check on Kami and there he was, perching on the side of the bin! OMG! How did he manage to get up there!?! I guess I’m preparing the cage just in time!