It was a long day, long drive to The Aviary –exotic parrot store in Miami– where we got Kamuela (Kami for short) and a long drive back…🥱
But it was one of THE ☀️ BEST DAYS, Ever!
This beautiful, handsome and sweet seven week-old old parrot is a gem! 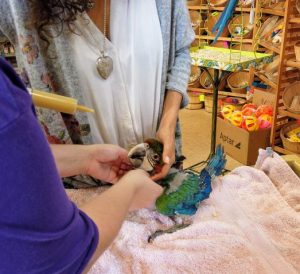 🦜What Is A Harlequin Macaws

Harlequin Macaws are a cross between a Greenwing Macaw and a Blue & Gold Macaw — and both these parrots are said to have great personalities and make great companions.

LIFE EXPECTANCY: 50 years, some may reach up to 80

We have added a new member to the family! This Macaw could outlive me or maybe we’ll spend the next 50 years together! It is special to be a part of his young life. He still has the 🥄 spoon-shaped lower mandible which baby parrots have for catching food more easily when being fed. As he grows over the next months, his beak will bring itself in, matching the top beak.
He still shows his down feathers (light grey) and has several pin feathers (which look like 🦔porcupine quills) sprouting! He’ll never look like this again. Once he is fully-feathered, he will molt feathers once or twice a year, but like our hair that is constantly being replaced, his feather growth won’t show ‘bald’ spots. It will be unnoticeable, with new pin feathers sprouting through.

He hasn’t been too loud, and ‘croaks!’ Too cute.
On our drive home my husband commented on how quiet he had been, so Kami then  sqwacked loudly in the car!
Oh no! He’s already louder than our Catalina Macaw and he already weighs as much as she does!
The breeder did meet us at the store and he said that Kami will likely be BIG! He pointed to the Hyacinth Macaw in the store, illustrating Kami’s future size. 😱
Mind you, Greenwing Macaws are the second largest macaws, right after Hyacinth Macaws, and the breeder said that this is the size these parrots of his make!
Should I hope that Kami will be a monster big bird (go big or go home!) or should I hope he is a smaller size, like Kailani, so that I can handle him?

Harlequin Macaws are said to have the mellow, relaxed personality of a Greenwing Macaw and the fun-loving side of a Blue & Gold Macaw, their parents. They are button fanatics, so button-ups beware! You will be hunted down for fun, pulled and — killed!

As with any Macaw, I will need to provide Kami with a steady stream of enrichment (natural branches or palm nuts to beak, brutalize and beat to death) and toys, to do the same.

🐐 Similar to goats that chew the cud, Macaws must beak a branch in order to be maintain their well-being. Since there is no forest in my back yard, my second-best choice is raw, untreated wood from the home-improvement store. I’m getting too comfortable at the home-improvement store, who would have guessed that they would have so many things for my parrots? Wood, PVC, plants…

The truth is that we love animals, and I’m crazy about parrots 🦜

Parrots are highly intelligent and they look at you. They take it all in and Kami is already doing that.

Kami is accustomed to being in a “nesting box” with his sibling. Birds of a feather are always together, so I hate to have him sleep alone, but Kailani can’t be his cage-mate yet. For one thing, she needs to get to know him. Also, his feet aren’t ready to perch or to handle a cage, not yet. Developmentally he is still in his nesting-box phase and needs to have a clean, flat surface that is warm and protective.

No, I don’t expect to be able to put them in the same cage for six to nine months. She’s about one year old, and right now that is too much of an age difference. 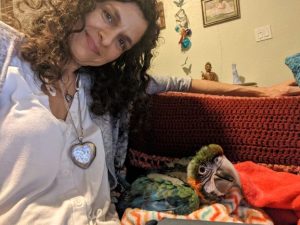 So I kept Kami with me for a while tonight. I wanted him to feel the warmth of another body next to him. So that he is safe for the night, he’ll have to sleep alone in his new “nesting box” (a bin), but I’ll put a teddy bear in with him. Tomorrow I will try to spend time with him, again offering a warm body next to him. I’m also going to start to introduce he and Kailani. I’ll go slowly, allowing them to just see each other and hear each-other at first. Kami is still young and is still developing his immune system, so I won’t let anybird in contact with him or his ‘nursery’ for a while. Besides, it would probably just scare him.

No, for now brining Kami home is like bringing home a new baby. There will be feedings multiple times a day and bin cleanings multiple times per day for at least another two or three months. However, babies are harder, can’t leave them alone for two minutes! Still, Macaws are work and baby Macaws are more… but also deeply rewarding, not as rewarding as a baby, but similar 💙

And a new adventure begins…