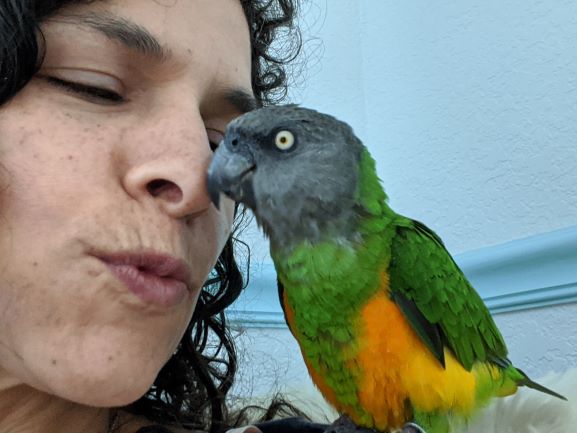 Senegal Parrots 🦜 Are The Best Pets! 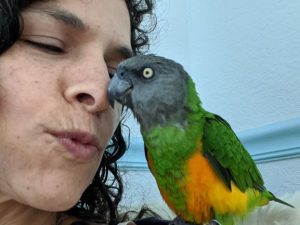 Now, you have to take what I say with a grain of salt, because I really love all my parrots. They are all unique and special in their own way. Each species is unique, for example in it’s talking ability or it’s diet, and then each parrot is unique within a species.

Given that, one of my favorites is my Senegal, Heromione.

What You Can Expect In A Parrot

Some parrot characteristics I look at include:

Parrots can be pet-like or a lifestyle choice. Let me translate that for you, parrots can alter your life-style because they take so much time and attention, which is generally true of the larger species, or they can be pet-like, generally the smaller parrots, allowing you to still travel, go out and do other things. They can require a lot of care (feeding, cleaning): surprisingly more so than a cat or dog when they are large, or they can be easy to take care of when they are smaller.

What I love about Heromione is that her personality offers me the best of all worlds.

Senegals As Companions That Are Easy To Care For

Heromione isn’t really a good talker. She does say some things some of the time, but her voice is not easy to understand. She has a ‘parrot’ voice – African Greys, Amazons and Cockatoo parrots tend to be the better talkers. Generally speaking, you could say that Senegal parrots are under-spoken since they aren’t known as talkers and they aren’t very loud.  Unlike Conure parrots or Cockatoo parrots, you may not even know there is a parrot in your home with a Senegal, or Seni as they are often called.

The African-continent parrots tend to be sharply smart; I think they are smart enough to be mellow too. It’s like they can’t figure what there is to freak out about. Even when Heromione was injured, she was very relaxed about letting me inspect her injury and tend to it. She surprised my veterinarian-father and I because she didn’t fight us or try to bite. She just let us take care of her.

Senegals aren’t like most parrots with each other, they don’t cuddle – like Lovebirds – or preen each other. Actually, they tend to stay at opposite ends of their cage. I’m not sure how they procreate… I asked Tony Silva, who is a world-psittacine expert – about Senegal parrots. He confirmed that they almost ignore each other until mating season. Nevertheless, Heromione and her cagemate at the time, Harry, ignored each other until they fought. Heronione was injured a couple of times. The first time, I ignored it because I had seen no issues. The second time I had to take her to the avian veterinarian and she no longer shares a cage with Harry.

Harry isn’t tame. He flies away from me and, although I’ve gotten to the point where I can pet his beak and the top of his head, he doesn’t spend time with me; he prefers to be in the bird room. Heromione, on the other hand, is very sweet with me. I adopted them as adults and she’s taken to me. 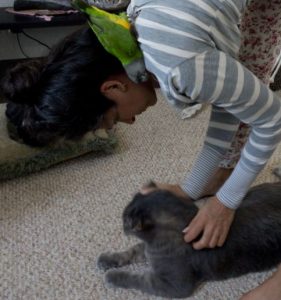 There are many things about Heromione that I love. She is easy to be around, she literally hangs out on me, even when I’m doing my yoga!

Heromione hits all the boxes: she’s easy to be with, not too loud – although she does screech sometimes. She is a great eater and is big enough for me to enjoy her, and although her personality isn’t as pronounced as a big parrot’s, she is sweet with me, she’s playful and I she understands that I take care of my Parrotlet parrots. They are five times smaller than her, but she never goes after them. By accident I learned that I can walk into the Parrotlet aviary and she doesn’t leave my shoulder. I don’t worry about her attacking, eating there food or acting aggressively – though I watch her. It isn’t uncommon for a larger parrot to attack a smaller one, especially if the larger feels threatened or jealous.

Because she’s a ‘medium’ sized parrot, she isn’t terribly messy. No big 💩 piles from her! And, Senegal parrots are ‘inexpensive’ – at around $1,000. She’s not a ‘needy’ parrot, although she does like to spend as much time with me as possible.

Harry, On The Other Hand

Harry isn’t tame, so I can’t rant and rave about him. While I would choose a friendly Senegal parrot if I didn’t have any parrots and could get only a couple; of course, I would choose one because Heromione is such a fantastic parrot. I don’t bond with Harry, although I have tried spending some time taming him. I was struck by how quickly he caught onto what I was doing. He understood that I was trying to connect by touching his beak; that I wanted him to walk toward me when I had a treat. He just seems to know what I’m doing and he’s on board.

What More Could You Want In A Parrot?

Intelligence, sweet, cuddly and affectionate. Not loud and easy to be with. A true companion! Whether I’m working on my computer, cleaning or doing yoga, Heromione is a companion. A gem.

My Senegal parrot is one of my favorites, and I love them all, but having experienced nearly 20 different species of parrots, these guys are in the top of my list. Awesome parrots!

Have a questions about parrots?
As the author of “The Parrot Bliss Bond,” I love and welcome questions about having a parrot and creating one of the best experiences of your life!