The Pocket Parrotlet, Bun, & Why He Should Hate Seeds 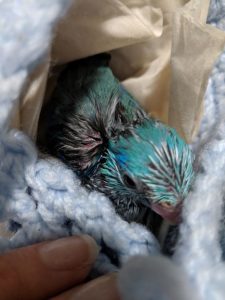 Bun’s Siblings & Why He Should Hate Seeds

This is Bunny! We named this Parrotlet in the spirit of abundance because we’re reading a book on shifting your mindset to attract more money-
Bun, for short, is the littlest tike we have right now. We had a couple clutches before him that taught us that the parents can’t have seeds to feed their babies, (because it’s too dry, hard for his new body to digest). Seeds equal bad news…
Let me back up a little… 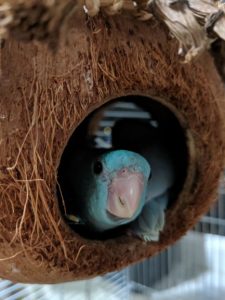 I’m very into my parrots – and I go out of my way to do what’s best for them. I also have ‘teacher’ in my bones- so I’m writing a book on how to have a blissful parrot-bond; I’m currently wrapping it up and hoping to have a forward from my fav parrot expert! Then I’ll publish it and offer it on my site 🙂

All parrots are different and they all require some differences in their diet. Sometimes, it is important to know the slight, but significant, differences — for example, I read that Eclectus parrots can’t have eggs, which is common for breeding pairs of parrot-parents.

My research is challenging because, as we all know, you can find contradictory information online about anything. Several seemingly-reputable sites online said that Parrotlets don’t do well with pellets and should be given more seeds. My vet agreed that Parrotlets should have seeds – after a lot of veggies and some pellets. For this reason, I cut back on pellets… 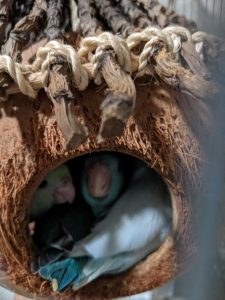 My Head Is Spinning

🦜 Parrotlets are the smallets parrot ‘in the New World.’ They generally weigh around 30 grams, which is about 12 pennies. Their size has earned them the nick name ‘pocket parrot’ and their beautiful blue variations (they are mostly greens in nature) ring “blue bird of happiness” to me.

I try to feed them well. Ugh!

So, based on my research, I allowed my Parrotlets to have seeds. Fresh veggies and seeds.

Of course, I figured it out — seeds were not working. It’s just not natural for their diet to have so many seeds; in nature this would never be.

When I’m hand-feeding parrots and when they get closer to weaning, I like to put them with Parrotlets that recently weaned, if I have any. This way their older ‘siblings’ model eating, perching and help them along.

I placed Bun with Annie, who I had just ‘rescued’ because I had figured out that feeding the parents seeds was the 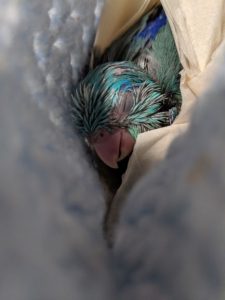 problem. Her crop (and her siblings) was packed with seeds, so I had to pull her (take her and her brother out of the nesting box), removing her from her parents, so that I could try to correct this. She was only 5 grams, her brother was 4, and it wasn’t easy. I like to wait for the babies to be old enough so that they have made it past a super-delicate stage and they aren’t eating 10 times a day! But I did it, I fed Annie and her brother as often as needed and did all I could to get her past the problem. It worked!

Well, Annie decided to help me feed Bun, and fed him seeds! This made his crop rock-hard and engorged. She fed him a lot! I had to flush his crop, which I don’t like to do. This means that I put some warm water, maybe with a drop of apple cider vinegar in the water (so that very, very little vinegar goes into the Parrotlet). The mix goes into his crop and then I hold him upside-down to, basically, induce regurgitation or vomiting. Yes, this can be as dangerous as it sounds, a parrot can choke or aspirate. Nerve wracking!

I removed Bun, which I don’t prefer to do even though he was with his brother. I fed them for a few days and then put them back in with Annie. Problem is that my fav expert told me that the seeds I feed my Parrotlets (and other little parrots) should be wet, meaning semi-sprouted or sprouted. Annie, however, is young and I saw that she and the two other young Parrotlets, Chickoraff and Chuck, that were in with her, didn’t know how to eat the pellets yet. Sprouting takes time, so I didn’t have wet seeds to offer. The good news is that they were more willing to eat their fresh veggies than usual. The bad news is that I had to give them some seeds… Can’t let them starve. Parrots have to be transitioned…

So, tonight I had to try to flush Bun’s crop — again! “Hurry!” I say to the seeds I’ve got in water, “Sprout!” Just waiting on them! Bun, poor thing! One of the things that I love about parrots, which is true of animals in general, is that they don’t complain. It was tough getting some seeds out of Bun’s crop, I had to hold him upside down several times. It’s stress on a body, but he just made the best of it. His mates all crammed themselves into a coconut in their cage — so cute! — and there is no room for Bun. Plus, the coconut is suspended in their cage, like a hole in a tree for them, but Bun isn’t climbing yet. He’s still in a ‘in the nest’ stage, so he’s not out and about. Parrots go through stages, of course. It’s magical to watch: Bun has started to come out of the plastic box that is on it’s side and offers him a “nest.” (Note, Bun’s ‘floor’ must be solid and maintained clean, so he receives new bedding with each feeding; the solid floor is because baby parrots can’t yet navigate a wire floor.) This morning he saw me and ran out of the box and to me because he saw that it was feeding time! Melt my 💙! Soon Bun will start to flap his wings more often and then he’ll start to perch on a piece of dry vine I have at the bottom of the cage for him. Then he’ll start to climb up to higher perches as he starts to eat and fly.

I love watching Parrotlets fly. They remind me of humming birds because they hover for a second and you can hear their wings hum. They are small, but they still belong to the hookbill family, or the parrot family, which is called ‘hookbill’ because their beaks ‘hook’ over. This translates to mean that they bite. So, befriend these little blue parrots of happiness and you might not get bitten and you might be able to put one in your pocket.