Yes, There Were Parakeets in North America 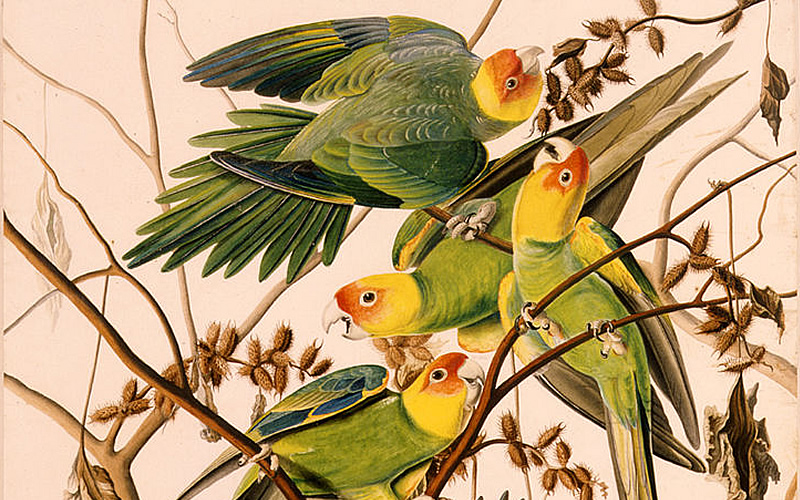 Interesting to learn that we had a parakeet in the US. Although parakeet just means parrot with long tail, I tend to know “parakeets” as budgies. I love finding out that we had native parrots here!

S.C. Encyclopedia  |  Now extinct, the Carolina parakeet (Conuropsis carolinensis) was a dove-sized (about thirty-five centimeters long) bird with a bright green body, yellow head, and orange face. Mark Catesby, an English naturalist living in Charleston, painted the parakeet in 1731, thus providing the first scientific description of the species. The species was abundant in early America, and its range extended to New York, Colorado, and Florida. The Carolina parakeet was well known for its ability to withstand harsh winters, due to the winter availability of its main foods: cockleburs, thistle seeds, and sandspurs.

The parakeets nested in tree hollows, usually in mature bottomland forests composed of cypress or sycamores. Although it is believed that a high fraction of the population did not breed each year, low reproductive rates may have been balanced by longevity. Many captive Carolina parakeets lived ten years, and one was believed to have attained thirty years.

Several theories exist regarding what caused the extinction of the species, including hunting, loss of mature swamp forests, competition with imported honeybees for nest holes, reduced food supply, and disease. Disease has been generally accepted as the main cause. The parrots were highly social and often roosted together, which would explain the rapid spread of a disease. In the 1800s naturalists noted declines in parakeet numbers, and by 1900 it was apparent that the parakeet was rare outside southern Florida. One of the last verified sightings occurred in June 1938 when Warren and Hollie Shokes saw a pair with a young bird in the Santee River swamp of Georgetown County. Thus, South Carolina was the site of both the first sketch and a final sighting of the Carolina parakeet.

— Excerpted from an entry by William Post.  This entry hasn’t been updated since 2006.  To read more about this or 2,000 other entries about South Carolina, check out The South Carolina Encyclopedia, published in 2006 by USC Press. (Information used by permission.)