How To Handle A Parrot That Bites 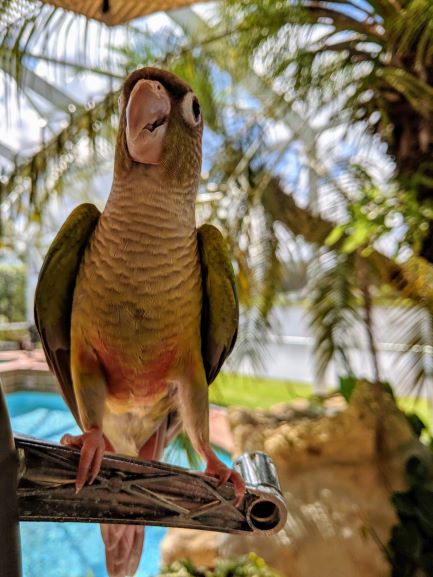 What Do You Do With A Biter?

This spring I hand-fed Teddy, a Green-cheek conure that was hatched to us! I just loved Teddy, which is so easy to do, because as babies parrots sleep, love to be coddled and bond sweetly with you.
Because I was feeding Teddy every couple hours, I took Teddy to my mom’s house where she slept in a blanket, ate and was doted on! I loved having her with me and close to me.
Baby parrots can be very hard to feed. The first thing you have to do is learn how to teach them to learn to eat from you! They are accustomed to their parents (but their parents had been feeding them less, so I was concerned) and it’s an adjustment to take food from a person. They have to be fed the correct way too, because if their food goes down the wrong ‘pipe,’ they can aspirate. Their food also has to be the correct temperature, the correct mixture…. no pressure!
It’s a tricky thing with some parrots, and Teddy had originally done really well with me but then we started having a tough time. I was uncomfortable, last week Teddy was eating plenty and then she was hardly taking anything, I had felt. She was too young to be eating on her own, so she had to take formula.
How we got through is a bit of a blur… I can probably chalk it up to my being available to feed her when she was willing. You may already know, I’m a strong believer in healthy foods being key to health. She is only 4 days younger than her older brother, the only 2 eggs that made it from the clutch, but she behaved a lot younger. I’d also hand fed him, Edgar, because his crop was looking more and more empty! Ah! These parrots were trying to give me a heart-attack!
Once Edgar was eating well, I was able to put him with Markle, who is only a little older. She was thrilled to have the company, but I didn’t feel like Teddy could join them yet. It took a couple of weeks before I let her join them, she just seemed to grow up a little more slowly.
Now after all of the bonding and anxiety-producing experiences we shared, I was really surprised when Teddy started biting a couple of days ago!

Some birds just bite. Ugh!
This doesn’t mean training can’t help shift their behavior. My daughter literally let Markle bite her a couple of times without reacting so that Markle would realize that biting doesn’t produce a result. With her new Crimson, she has been spending time with him, letting him get comfortable (he used to be hand-tame but has been ignored, which is why he was re-homed). By spending time and letting him know that he’s ok, he’s safe and loved, he has started to step up without biting her.
Most hand-raised parrots don’t bite. I’m letting my Teddy bird be with her flock, so she’s forgetting me 😢- but spending a little time with her helps.
Parrots with a past 🧳 carry baggage that we don’t know about. They could easily be insecure, at best, because they would naturally be hatched to their parents and then they’d stay with them while they learned how to be a ‘parrot.’ In captivity, they hatch, are hand-fed and then adopted out and re-homed sometimes.
We have a biter who pushed us in the past because he just liked to scream and bite, even when he was doing well and was being given seeds as treats!
As with people, I find that healing a parrot requires giving them the time and space to realize that all is well and that – even when they scream and bite – they will be given the love and caring – of clean food and cage – that they need. Biting parrots are defensive for a reason. We may be threatening them because that is all they perceive based on their past, or they just may not be ready or comfortable. For example, Green-cheek conures tend to be very affectionate and love to be pet but Indian Ringnecks do not like to be pet. So if you are insisting on petting your Ringneck, you are probably getting bitten. Your Green-cheek, on the other hand, is misunderstood for one reason or another.
Talk to your parrot without touching a biter. Give her the time and space. Provide him with other things to bite (toys) and provide understanding. While parrots do not understand all of what we say, they do get a sense of it. Explain that you are going to work with her and let her be however she is.
Be patient. Not every parrot is cuddly, but they come around and even express their happiness with cute sounds and deep looks of appreciation in their eyes, when given the time and space to come out of their shell.